Here is a gripping account of battle between a Master General (green) and the game’s creator (me, playing as the blue Royalists). 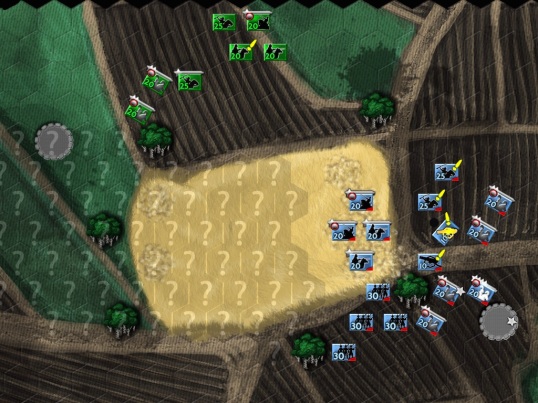 The first sighting of half a dozen (green) Parliamentarian forces made me suspect some kind of pincer move.  However, with nothing in the south and the wheat untouched in the middle, I sensed an opportunity. 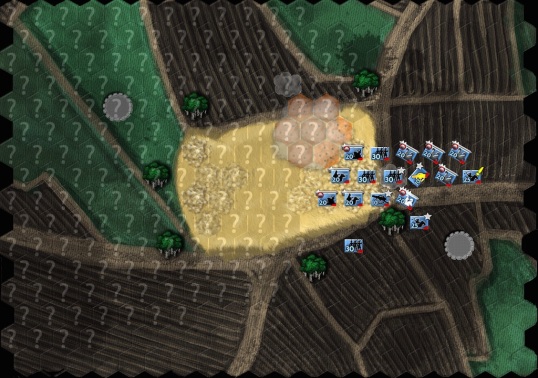 So I gathered my forces and ignore any southern defence in favour of a massive strike upon the few in the north. I wisely pull back in the wheat a bit and smile as the puritan howitzer round hits nothing and also gives my movements even more cover.  Although I am also completely blinded. 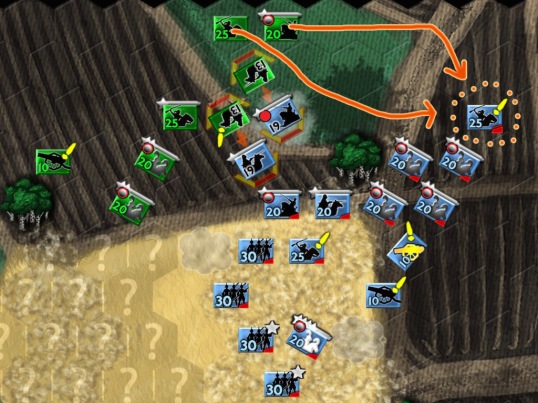 First I lock up the 2 dangerous Lancers. Those units hit hard when they move and attack. A solid defensive move.

Then I prepare the trap. The bait, top right (blue) is an unarmored Dragoon unit (still mounted). The enemy light-cavalry (top right green),  a Harquebusier could melee lock and point blank blast the mounted Dragoon and only take 1 damage back.  Likewise he could pull in the unarmored dragoon (to his left) in as well for defensive support and help the point blank attack as well.  My bait-and-lure Dragoon would have to break away (what’s left of it) and it would basically be out of the fight before it got a chance to do anything.  Who can resist a mounted Dragoon that foolishly wanders too close to the action?

(Actually the trees didn’t hide much, so it wasn’t much of a trap.)

Hmm.. Where did that RoundHead heavy cannon come from?  There was nothing there a moment ago. 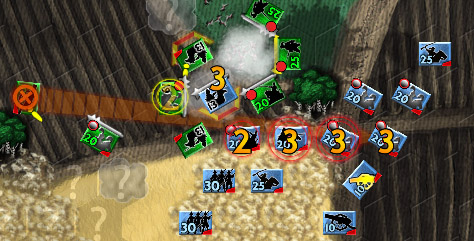 Instead of taking perfectly reasonable bait, so that my 4 heavy units could decimate something. This RoundHead Commander decides to instead obliterate one of my units pinning his Lancer and then embarrass me by shooting 5 of my units in one shot with a Heavy Cannon no less!

After the battle lines wear down a bit I decide to shake things up a bit with a Dragoon charge through two of his locked units. So I charged and then dismounted unscathed. The ‘dismounting confidence’ protecting my pressed unit from outright capture. Before the charge, I could not see that there were so many units back there. So naturally with nothing better to do they gang up on my foolish Dragoon. Now if I had some other plan that required those units to be distracted it would have been brilliant, but alas it was a foolish move on my part. 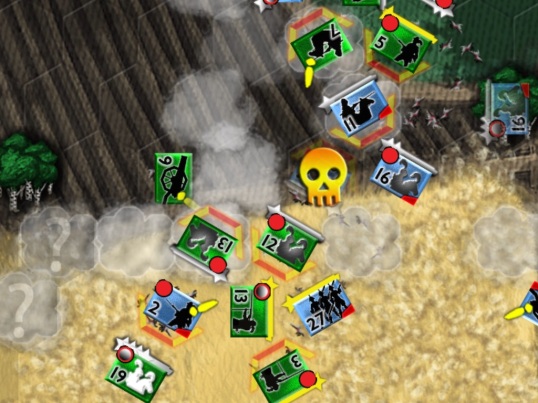 Even his commander enjoys getting on the action of ‘beat the fool Dragoon’. I was a bit surprised the enemy commander did not decide to capture him instead. I guess he had his mind on other things like grape-shooting my other unit to smithereens, which freed his elite unit to rout my heavy cannon. 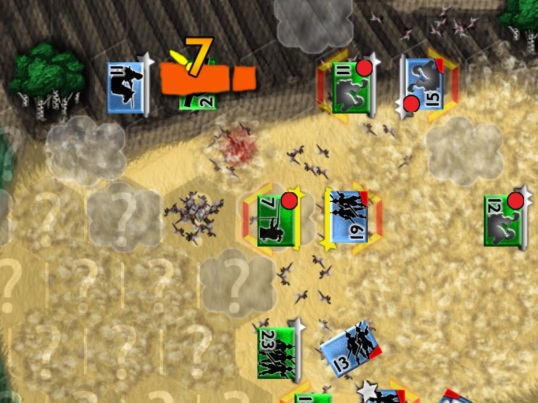 I immediately return the favour and attacked his cannon as well. His cocky cannon had confidence at this point (obviously) and so my Lancer failed to outright rout him.  I was glad I could at least do a tit-for-tat, but it left my precious armoured Lancer vulnerable behind enemy lines. 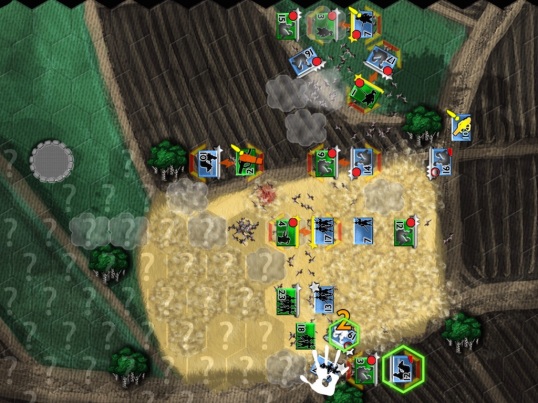 I couldn’t see where the enemy commander was with all the dam smoke and wheat in my face but I did notice a conscripted unit was melee locked near my commander so I told my guys to break away and I moved in and captured the unit.  The pressed unit was relieved to now fight for the RIGHT side and helped protect my commander.  I needed all the help I could get as I was right up there on the volatile front line now. 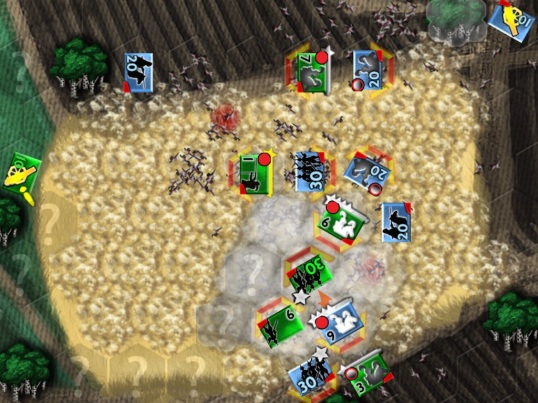 Then a bunch of fighting happens, we both take out some more units and then the enemy commander makes a bold move and charges though to my side and surrounds my commander with danger. His howitzer is thankfully a bit too far away to make me panic, so rather than your typical ‘attack defensively to free myself’ I decide to go on the offensive back – and my howitzer IS in range of his commander.  So I give that RoundHead Commander a good thrashing, down to his last 6 men. 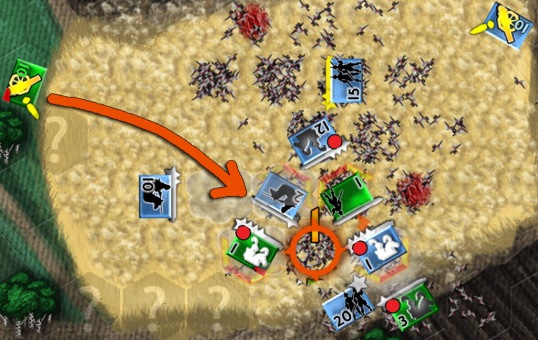 He wisely retreats into the smoke.  I don’t see him.  I move one Lancer to look for him in one area, nothing!   So I move another lancer in for the kill and the best I can do is kill all his men except for the commander himself.  When it was his turn he manages to do the same to me.

Two lone commanders both mounted in a sea of dead horses and men.

It was still his turn and the enemy knows he has no choice and orders a suicidal howitzer round despite being too far away and lucks out and kills me!  He also killed himself as well.

Otherwise known as – a tie. 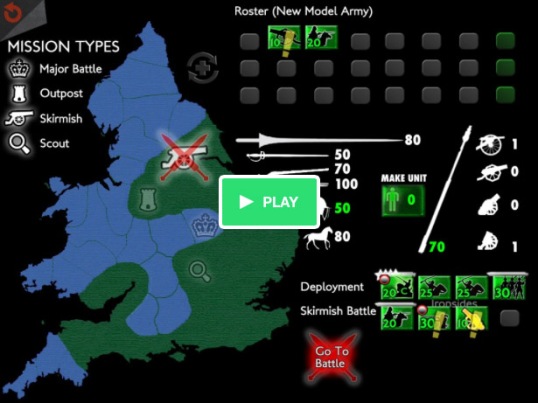 So we RE-DID the video.

The first few seconds are the same, but after that David Malinsky explains quite a bit about what’s going on, and I follow up with some of the “WHY” of Musket Smoke II.  Plus if you were ever curious about why I made the original Musket Smoke then take a look.   Check it out.

A pledge of 7 dollars will get you the full game and access to gory online battle testing! 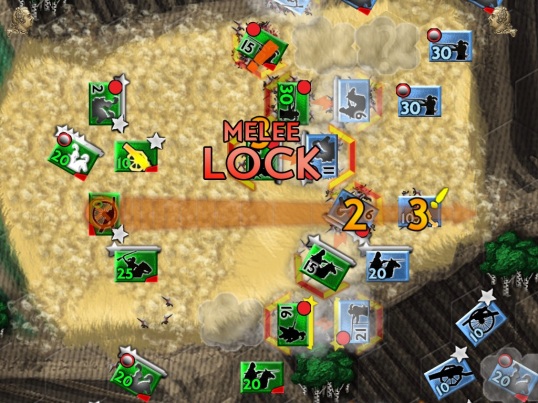 This could be you – today!

Musket Smoke II has officially opened up Online Matches for Kickstarter backers.  Check it out!

If you think this is great, you should check out the plans for the Single Player Campaign!  (included at no extra cost)

If you are interested, pledge at least 7 dollars to the kickstarter and send the email of your Game Center account to me at my gmail account at ‘snowpunchgames’.

(This is a good opportunity because if the kickstarter fails, the game will not be completed and you will not have to pay.  Which  means that you get to experience these online matches for free.  This could be your only chance to try this new game.)

We all know the passion you have for Musket Smoke.  Especially me as I recently updated our Public Responses section with all your written App Store reviews.  I always get really pumped when reading that section. You should check out what your fellow commanders think about the game.  It’s inspiring!

This current situation is:  We currently only have written 7 reviews (world wide) for version 1.57.  4 from the US, 1 from Japan, 1 from Canada, and 1 from China.

This is important because snowpunch doesn’t want to go gently into that good night.  I’m pulling out all the stops to help Musket Smoke II get made:  ie:  iPhone support, a kickstarter, a Facebook page, and even that silly first game I made Keg Bearer just went free to help push us forward.

If you need further inspiration, listen to the Musket Smoke Ballad on the kickstarter page.  It’s a hoot!  Or check out my favourite review of Musket Smoke.

If you need even more inspiration for your AppStore written review masterpiece..  then check out the Public Response area.  But seriously just follow your heart, say it how it is – warts and all!   Let people know the game exists.  Let people know what you honestly think.

We all benefit from this. More commanders to play against, and snowpunch might not get Gore Piled!

I’ll leave you here with the Lyrics to the “Musket Smoke Ballad” by David Malinsky.   🙂

Oh, come all ye gamers, come hither and yon,
come cease all yer squabbling, there’s war to be won:
ye’ve battled with the Nazis, with rifle and tank
ye’ve tussled with Zombies with chainsaw and plank

But the times, they’re a changin, new fights to be fought
for the people are risin’ but the games, they are not.
put down them machine guns, starships and the like;
and take up the horse, musket, cannon and pike

bridge/chorus:
For MUSKET SMOKE is the name of the game
For Gunsmoke’s the greatest of monsters to tame

Yer troops are assembled–they’ll move at yer call,
with swords and with lances, with powder and ball;
They’ll fight ’till they’re done for, most gallant of men,
unless you have sent them to die in a deathtrap again!

Be bold brave Commander, and bloodthirsty, too!
Yer rival’s a’waitin and aiming fer you!
Learn flanking and charging, the ways of the gun:
For a winner in war, there can be only one!

No Romans, no Mongols, No Planes in the Skies;
Just yer wits will determine who lives and who dies!
Vict’ry comes to the thinkers, the swift and the brave;
Leave die-rolls and card games to fools and to knaves!

So come folks and join us, for barely a fee!
The lads have been waitin for you and for me!
Grab your phone and yer tablet with banners unfurl’d
Show ’em all that you are the best in the world!

Over the last year, once in a while someone would email me some tidbits about some Musket Smoke battle that they had with so-and-so.  I always deeply enjoy those stories (probably extra much because I’m the developer) and would like to hear more of them.  The new Musket Smoke Facebook page would be a great place for that.  Then others can comment and we could talk about things.

Many of us know each other (from the battlefields) so we all like to hear battles stories about two of our previous opponents duking it out.  Because WE KNOW THEM.  So the stories are familiar feeling and fun.

Facebook is also a good place to ask questions if anything confuses you about the game.  I’m always ready to answer questions.

It can be awkward for some of us to post.  I’m fairly shy myself so I know what that’s like.  But I think it could be good for our community of players.  Especially now that we have a surge of new players from both iPhone and also the kickstarter.  (Plus Keg Bearer just went free help with promotion)  I am sure some of these new players would enjoy the stories or even just some casual chatter about tactics on particular maps.

Sure I am also trying to plug MS and get the page activity up but I also really think it would be cool as the commenting on this blog can be a bit awkward or hard to find.  Facebook would be ideal.

Pics of battles would be also great, as well as videos.  Now with the latest Mac OS, you can plug in your iOS device (if you have the new little cord) and record high quality video using just the quick time player.  So I’ll probably start posting a short video of the odd interesting round from time to time.  It would be cool to collect and immortalize some of our rare and interesting moments on the battlefield.

I’ll go first and post a shot of me achieving my new years resolution.  Namely, beating Armin1962 on ‘The Ringer’ map. 🙂

This kickstarter video shows both the new Online Multiplayer and also a brief walk through of the new Single Player Campaign.

Plus after the video check out the crazy Musket Smoke BALLAD.  A song written and sung by one of our own players. Absolutely guaranteed to make you smile!

All the gore pile details about Musket Smoke II you could ever want.  And a great video too!

You can find the page at Musket Smoke on facebook.

I’m not managing it directly, but it’s still good to have another line of communication open. 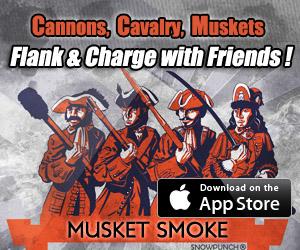